The Customer Portal is currently down for maintenance. Please check back soon. We expect to be back in a couple of hours. Thanks for your patience.

As the upward trend in Medicare Advantage (MA) enrollment continues, with no signs of slowing down, the question we at Magpie Health Analytics have asked ourselves isn't a matter of when MA enrollment will overtake Traditional Medicare (TM) - because we are already there - but by how much and what it will mean for the future of MA.

As of June 2022, 48% of eligible beneficiaries were enrolled in a MA plan, according to a recent brief by the Kaiser Family Foundation. In comparison, five years ago, MA comprised a little over one-third of total enrollment. In addition to rapid growth, MA also has an edge over TM in its ability to retain members. In fact, according to research featured on JAMA Health Forum, 77% of members who started in TM and switched to a MA plan were still enrolled in Part C five years later. Even more impressive, 85% of members who started with MA remained enrolled after five years.

A recent survey of Medicare beneficiaries by the Commonwealth Fund suggests factors that contribute to future growth. For instance, results showed that 20% of Part C enrollees relied on information from friends and family to select a plan. As MA enrollment balloons, it is likely that more eligible beneficiaries will know someone who is or has previously been enrolled in a MA plan. Assuming good patient experience with Part C, the "Word-of-Mouth" phenomenon may further drive-up enrollment numbers.

As more beneficiaries opt for MA, coupled with the trailing edge of Baby Boomers aging into Medicare by 2030, we can expect Part C enrollment to continue its upward trajectory.

As of September 2022, more than 51% of Part A & B eligible beneficiaries are in Part C. By comparison, just under 47% of the total eligible population are in a MA plan.

To answer the question of how much MA will overtake TM in the coming months, we analyzed historical Medicare enrollment data from October 2019 through September 2022. We aggregated county-level counts of a) MA beneficiaries, b) Part A and B eligible beneficiaries and c) total Medicare eligible population to generate national monthly counts. Using exponential smoothing forecast methods, we projected enrollment from October 2022 through January 2024. We then calculated two penetration rates:

Our forecast models resulted in a high degree of precision with an overall error of <1%. Our forecast results indicate that by the beginning of 2024, MA will be the choice of a clear majority of Medicare eligible enrollees, even using our more conservative penetration rate that includes approximately six million Medicare beneficiaries who have not opted into MA (e.g., ESRD populations and Part A-only beneficiaries). 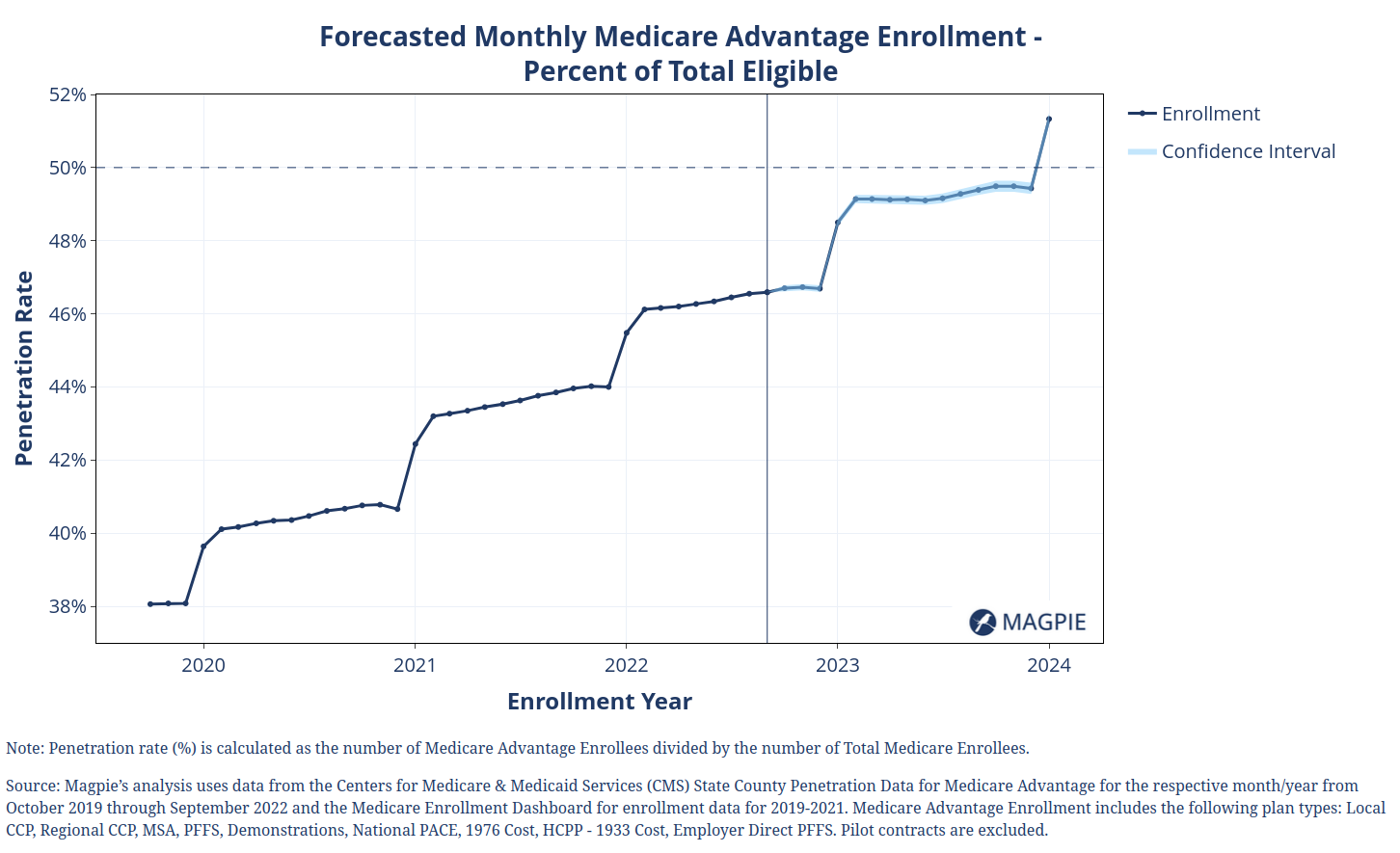 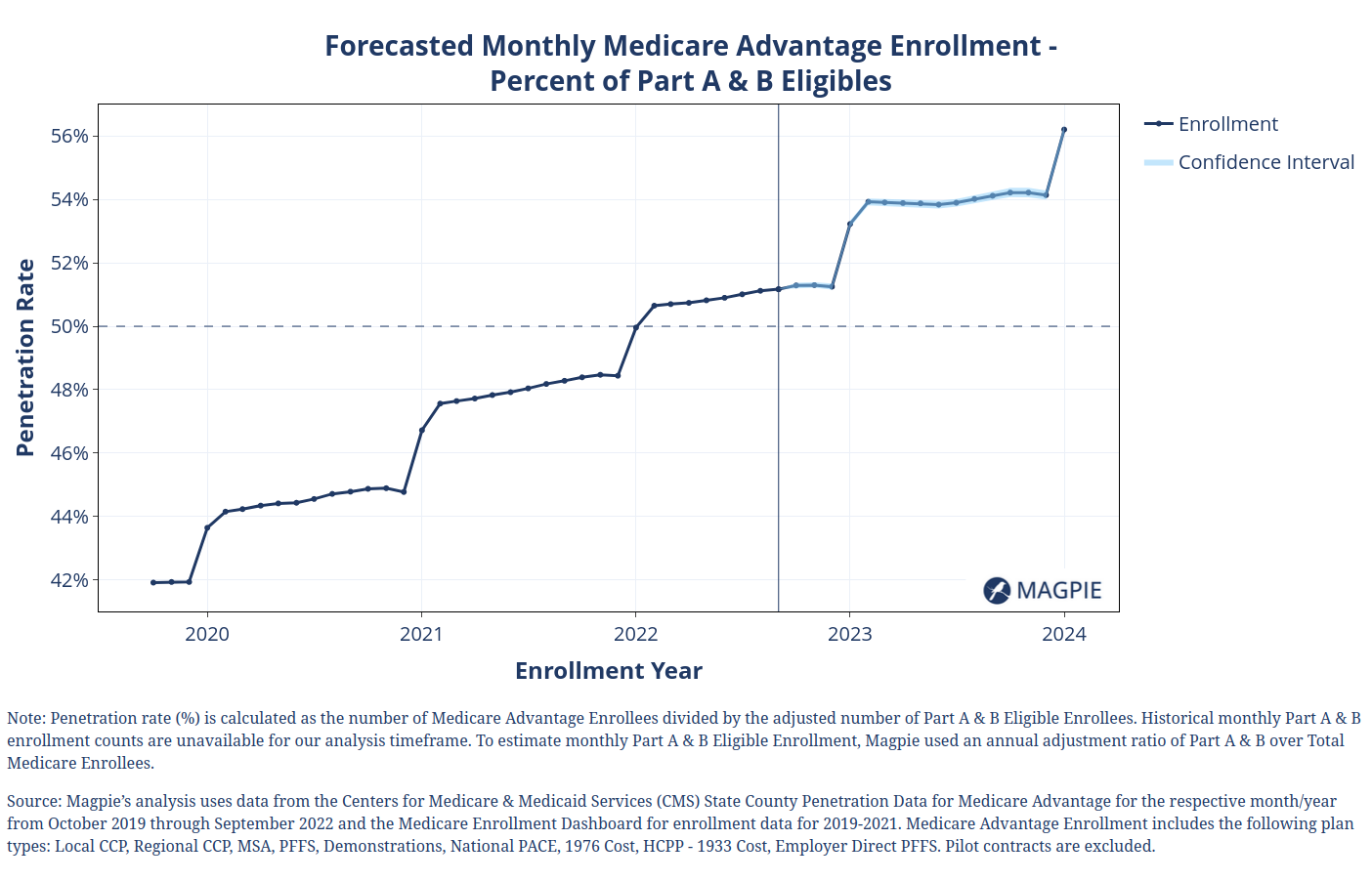 While CMS once again delayed the timeline for publication of the MA Risk Adjustment Data Validation final rule, ever increasing MA enrollment will only heighten the calls for more risk adjustment oversight. MedPAC estimates that MA plans were overpaid $12 billion dollars due to higher diagnosis coding intensity - leading to higher risk scores - and the Office of the Inspector General (OIG) continues to report overpayments resulting from inaccurate diagnosis submissions in audit after audit. We anticipate that there will be increased scrutiny from CMS, OIG, Congress, and other stakeholders given the financial impact and policy implications of potential overpayments that will only increase with more enrollment.

Plan competition is also expected to ramp up with the growth of MA enrollment. In 2022, beneficiaries faced the daunting task of selecting from an average of 39 MA health plans offered in their county. In 2023, the large insurers, who dominate the MA market, expanded into even more counties. What this means for enrollment competition - especially in highly concentrated markets bears watching closely.

As part of our mission to provide actionable insights to healthcare payers, Magpie Health Analytics will be releasing a series of articles that will project future MA growth at the county level, giving invaluable perspective into the market-level impacts of the changing MA landscape. Sign up below to receive future articles in this series and other insightful articles on timely health care topics.